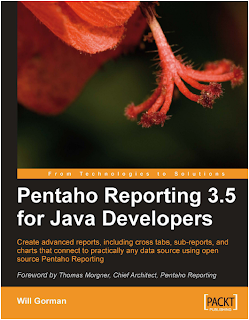 So, I've finally finished the book Pentaho Reporting 3.5 for Java Developers. Thanks to Richard Dias from Packet Publishing for the opportunitty and apologies for writing this so late.

So, as I told in the last pentaho reporting book post this book is really good if you need a faster learning curve or if you need advanced reporting capabilities like subreporting, crosstabs, complex functions, styling, etc; but is totally needed if you plan to extend the capabilities of the reporting engine such as Swing or JS events, weird data sources, new report elements or direct interaction trough the reporting API.

So the first chapter An Introduction to Pentaho Reporting , gives you a nice introduction to the reporting software as well the architecture of the product.

Chapter two, Pentaho Reporting Client and Enterprise Examples ,show you how to build basic reports and also how to deploy them into a Swing application or Java web container.

Chapter three, Pentaho Reporting Examples in the Real World, chapter six, Including Charts and Graphics in Reports, and chapter seven, Parameterization, Functions, Formulas, and Internationalization in Reports are the parts I recommend if you are interested in building complex and nice reports (you know, with images, sub reports, well suited to be exported to Excel, with groups, formulas, charts, etc). If you follow the samples in each chapter you'll become almost an advanced report builder.

The fourth chapter, Design and Layout in Pentaho's Report Designer explains the detail of every option in the Report Designer: menu, toolbars, bands, report elements, shortcuts, etc. While this chapter can be a little bit boring I recommend to give it an overview reading cause it has some tips inline while is explaining every detail of the items.

Fifth chapter, Working with Data Sources gives you detailed information of the existing data sources who can feed the report and also how to build custom data sources. If all your reports will be from a database you can skip the chapter.

Chapter eight, Adding Sub-Reports and Cross Tabs to Reports gives you a little  more insight in subreporting and also how to construct reports from MDX queries (OLAP). If you plan to make reports who need a pivot table layout you need to read the chapter.

Chapter nine, Building Interactive Reports explains how to use events in your reports both in JS (click events, hyperlinks, DOM, Jquery) or in Swing. Nice chapter if you need to deploy reports with high interaction or very dynamic from the UI perspective.

Chapter ten, API-based Report Generation, and eleven, Extending Pentaho Reporting, gives you the developer perspective. Things like how to generate a report on the fly, custom expression/functions, new report elements (and how to show them in the designer) and bean shell expressions are covered in those two chapters. This chapters are recommended for developers who plan to extend the nice features of the designer or need to do something very weird.

Finally chapter eleven, Additional Pentaho Reporting Topics show other issues like how to embed reports in the Pentaho BI Engine, publish to mobile browsers and how to ask for help in the Pentaho Communitty.

Well I hope this review to be useful for you, next post will be the same review but in Spanish
Publicado por Andrés Chaves en 15:09

Andrés Chaves
I studied computer science at Universidad de los Andes, Bogotá Colombia and work in the IT-Telco Sector, primarily in Data Warehousing and Performance Monitoring Applications. I am currently studying a Master of IT in The University of Melbourne